What is T-test analysis? 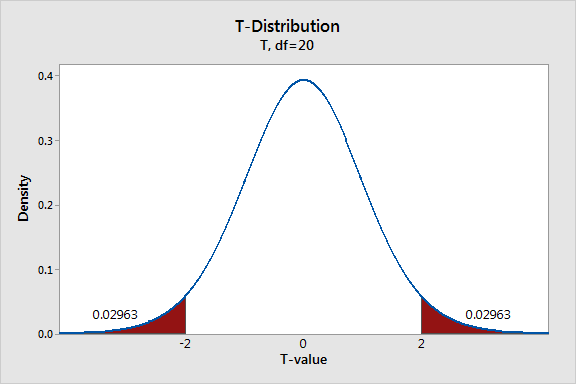 A t-test is a type of inferential statistic used to determine if there is a significant difference between the means of two groups, which may be related in certain features. It is mostly used when the data sets, like the data set recorded as the outcome from flipping a coin 100 times, would follow a normal distribution and may have unknown variances. A t-test is used as a hypothesis testing tool, which allows testing of an assumption applicable to a population. Essentially, a t-test allows us to compare the average values of the two data sets and determine if they came from the same population. Mathematically, the t-test takes a sample from each of the two sets and establishes the problem statement by assuming a null hypothesis that the two means are equal. Based on the applicable formulas, certain values are calculated and compared against the standard values, and the assumed null hypothesis is accepted or rejected accordingly.

CD ComputaBio provides a two-population t test, which is to test whether the difference between the average of two samples and the population represented by each is significant. The two-population t test is divided into two situations. One is the independent sample t test (there is no correlation between the experimental treatment groups, that is, the independent sample). This test is used to test the results obtained by the two groups of unrelated samples. The difference of data; the other is a paired-sample t test, which is used to test the data obtained by two matched groups of subjects or the difference of data obtained by the same group of subjects under different conditions. The sample composed of these two situations is the relevant sample.

3. Find the upper and lower bounds of the confidence interval.

CD ComputaBio' T-test analysis can significantly reduce the cost and labor of the subsequent experiments. T-test analysis is a personalized and customized innovative scientific research service. Each project needs to be evaluated before the corresponding analysis plan and price can be determined. If you want to know more about service prices or technical details, please feel free to contact us.