PyMOL is a user-sponsored open-source based molecular visualization system maintained and distributed by Schrödinger. PyMOL is suitable for creating high-quality 3D structural images of small molecules or biological macromolecules (especially proteins). The authors of the software claim that tens of thousands of scientists around the world choose PyMOL to view, share and analyze their molecular data. A quarter of all images of protein structures in the officially published scientific literature are produced using PyMOL. At CD ComputaBio, we will use the PyMOL program to visualize and analyze protein structures. The software itself is well written and easy to use, and it has become very popular with structural biologists over the past 10 years.

Our Services Based on PyMOL Software

PyMOL is a powerful and comprehensive molecular visualization product for rendering and animating 3D molecular structures.

CD ComputaBio provides elegant mapping of proteins, DNA and other macromolecules, structural analysis services, and instructions for use. PyMOL comes with a set of preset visualizations. With a few clicks, you can get technical views, simple views, and even views set up for publishing. Each preset emphasizes a different aspect of the scene.

PyMOL has an internal raycaster for ray tracing, a graphics technology that enhances shadows and smoothes jagged edges to render high-resolution 3-D images. We provide high resolution images for PowerPoint, projectors and computer monitors, only you need to provide the desired image size (in inches) and resolution (in dots per inch).

PyMOL allows you to measure distances, angles and dihedrals, and also find neighbors. We can usually judge whether there is a potential interaction between molecules by measuring the distance between them, and judge the rationality of the molecular structure by judging the bond angle. Scientists at CD ComputaBio provide clients with molecular interaction assessment services based on their proficient software skills.

At CD ComputaBio, our scientists can provide creation and replacement of bonds, atoms, residues and common chemical groups based on the PyMOL software platform. After modification, we can use an open-source implementation of the Merck Molecular Force Field (MMFF) to clean up the structure.

The Features of PyMOL Software 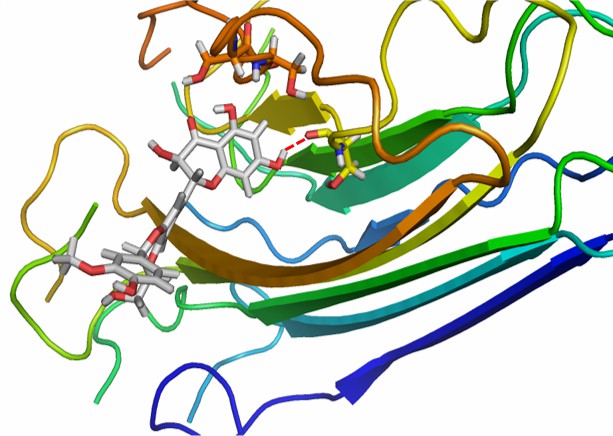 A single codebase supports Unix, Macintosh and Windows, uses OpenGL and Python, and a small set of open-source external dependencies.

Structures can be dynamically sliced, diced, and reassembled, and written out to a standard file (ie. .PDB).

PyMOL's cartoons are almost as beautiful as Molscript, but easier to create and render.

The best way to control PyMOL is through reusable scripts, which can be written in the command language or Python.

A built-in ray tracer gives you shadows and depth in any scene. You can also render externally.

PNG files output by PyMOL can be imported directly into PowerPoint.