rDock is a fast and universal open source docking program that can be used to dock small molecules with proteins and nucleic acids. It is designed for high-throughput virtual screening (HTVS) and combined model prediction research. rDock is mainly written in C++. The complete rDock software package requires less than 50 MB of hard disk space and can be compiled on all Linux computers. 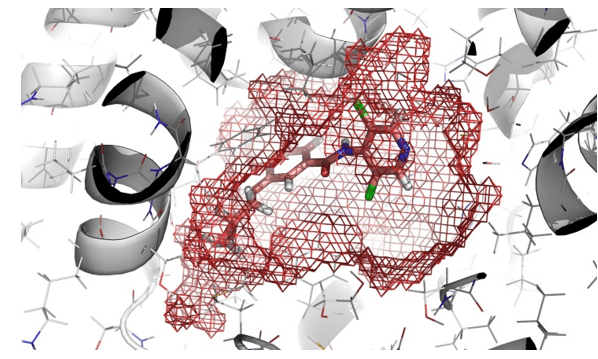 Figure 1 Software picture
(In red mesh, the definition of the cavity is obtained by execution of rbcavity program.)

Post-processing and analysis of results

Predict how a ligand will bind to a given molecule. The ASTEX non-redundant test set for proteins and DOCK and rDock test sets for RNA have been used for validating and comparing rDock with other programs.

Run for million of compounds in short time by exploiting the capabilities of computer calculation farms. Ease of parallelization in relatively unlimited CPUs to optimize HTVS running times. The DUD set has been used for validating rDock and comparing its performance to other reference docking programs.