Hydrogen bonding is a weak force that forms a special type of dipole-dipole attraction, when hydrogen atoms occurs when bonding to another electronegative atom with a lone pair of electrons present in a strongly electronegative atom. These bonds are generally stronger than ordinary dipole-dipole and dispersion forces, but weaker than true covalent bonds and ionic bonds. The hydrogen atom and the electronegativity atom X are covalently bonded. If it is close to the atom with a large electronegativity and a small radius Y (OFN, etc.), the hydrogen between X and Y is used as a medium to generate the XH ... Y form. [X and Y can be the same kind of molecules, such as hydrogen bonds between water molecules; they can also be different kinds of molecules, such as hydrogen bonds between ammonia monohydrate molecules (NH3 · H2O)].

An example on how we analyze hydrogen bonding

Running the CPPTRAJ script will generate the files: avg.dat, hbond.gnu, contacts-lifetime.dat and crv.contacts-lifetime.dat. The avg.dat file will print the average of each solute-solute hydrogen bond (sorted by population) formed over the course of the trajectory. Looking at the first 10 lines of the avg.dat, we have:

The lifetime analysis allows the study of the time-dependent behavior of the hydrogen bonds. The first 10 lines of the file contacts-lifetime.dat are: 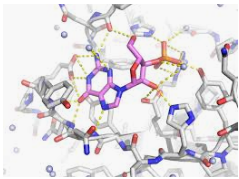 CD ComputaBio provides corresponding hydrogen bond analysis services. Structure and function are the central issues of modern molecular biology. The interaction between molecules is the cornerstone of this axis problem. The interactions between molecules mainly include covalent bonds, ionic bonds, hydrogen bonds, van der Waals forces, hydrophobic interactions, etc. The CD ComputaBio team has been working in this field for more than ten years, and can provide you with accurate analysis of related forces. If you have needs in this regard, please feel free to contact us.