Hybrid quantum mechanics/molecular mechanics (QM/MM) simulations have become a popular tool for investigating chemical reactions in condensed phases. In QM/MM methods, the region of the system in which the chemical process takes place is treated at an appropriate level of quantum chemistry theory, while the remainder is described by a molecular mechanics force field. Within this approach, chemical reactivity can be studied in large systems, such as enzymes. Using quality management to calculate the properties of a large chemical library is time-consuming and costly. High-precision QM/MM calculation is a multi-scale calculation method to study ligand binding. By using quantum chemistry representing ligands combined with molecular mechanics to characterize proteins and solvents, modeling time can be greatly reduced. Our bioinformaticians will provide you the most efficient quantum chemistry services. 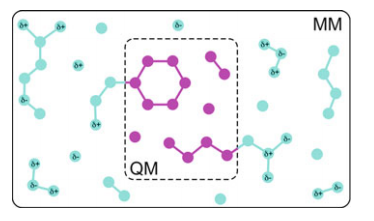 Figure 1. Illustration of the QM/MM concept. A small region, in which a chemical reaction occurs and therefore cannot be described with a force field, is treated at a sufficiently high level of QM theory. The remainder of the system is modelled at the MM level.

Figure 2. In the subtractive scheme, the QM/MM energy of the system is obtained in three steps.

QM and MM stand for the atoms in the QM and MM subsystems, respectively. The subscripts indicate the level of theory at which the potential energies (V) are computed. The main advantage of the subtractive QM/MM coupling scheme is that no communication is required between the quantum chemistry and molecular mechanics routines.

In additive schemes, the QM system is embedded within the larger MM system, and the potential energy for the whole system is a sum of MM energy terms, QM energy terms and QM/MM coupling terms:
VQM/MM=VQM(QM) + VMM(MM)-VQM-MM(QM+MM)

Here, only the interactions within the MM region are described at the force field level, VMM(MM). In contrast to the subtractive scheme, the interactions between the two subsystems are treated explicitly: VQM-MM(QM+MM)

These interactions can be described at various degrees of sophistication. 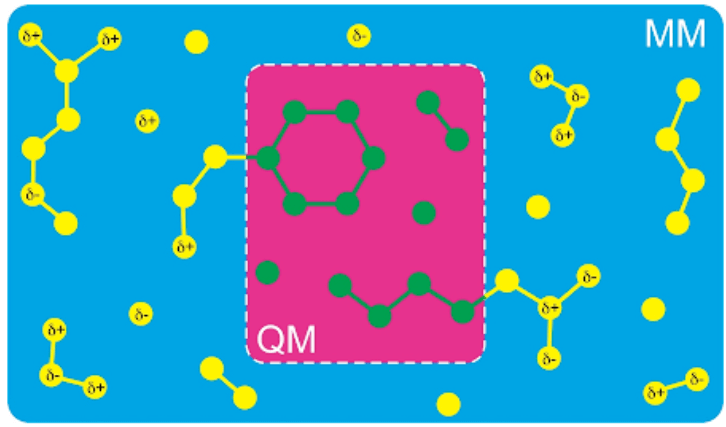 CD ComputaBio' QM/MM simulation service can reduce the cost of later experiments. QM/MM simulation service is a personalized and customized innovative scientific research service. Before determining the corresponding analysis plan and price, each project needs to be evaluated. If you want to know more about service prices or technical details, please feel free to contact us.