A gene interaction network is a set of genes (nodes) connected by edges representing functional relationships among these genes. These edges are named interactions, since the two given genes are thought to have either a physical interaction through their gene products, e.g., proteins, or one of the genes alters or affects the activity of other genes of interest. 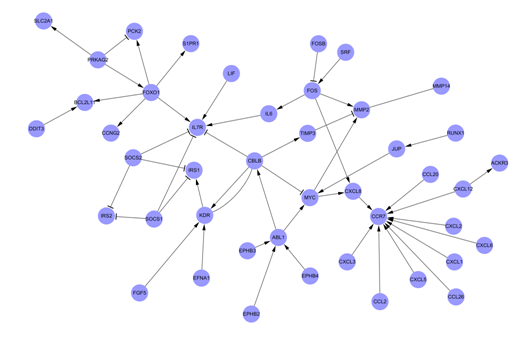 A gene network is a collection of a set of genes that cooperate with each other to control important life processes of an organism. CD ComputaBio conduct experimental verification based on the genes that customers care about, search for other related species databases, document mining and other information to construct a gene interaction network to find the key genes.

The mRNA that the customer is concerned about (such as the differential gene).

Cytocape file: which can be opened by cytoscape for detailed adjustment.

Text file: The interaction between genes, the order of key regulatory genes (such as betweenness centrality).

CD ComputaBio provides corresponding gene interaction network analysis service has proven to be very useful for understanding the biochemical basis of physiological events at different stages of drug development (even in different fields such as materials science). CD ComputaBio team has been working in this field for more than ten years and has published his findings in top scientific journals. If you have a need for network analysis services, please feel free to contact us.