The calculation based on weighted co-expression uses the division of modules of average hierarchical clustering, the correlation between modules and traits, selects significant traits, and constructs corresponding network diagrams to find core genes related to traits.

CD ComputaBio We will look for co-expressed gene modules, and explore the relationship between the gene network and the phenotype of interest, as well as the core genes in the network.

Once the β value for constructing the network is selected, four steps are required from network construction to module identification. 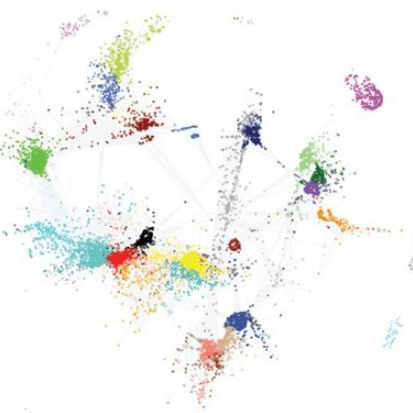 Step 1: calculate the dissimilarity between every two genes through topological overlap.

The similarity between two genes is calculated by topological overlap (TOM).

Step 2: get the gene cluster tree

According to the similarity between gene expression, hierarchical clustering is performed. Then through the dissimilarity conversion between genes, a gene cluster tree is obtained.

Step 3: Divide the expression consistent genes into the same module by cutting the tree.

The number of samples is more than 3 groups, and each group has 3 or more sample repetitions.

Text file: the genes of each module and the correlation between genes.

The correlation between modules.

CD ComputaBio provides corresponding WGCNA network service, which has proven to be very useful for understanding the biochemical basis of physiological events at different stages of drug development (even in different fields such as materials science). CD ComputaBio team has been working in this field for more than ten years and has published his findings in top scientific journals. If you have a need for network analysis services, please feel free to contact us.