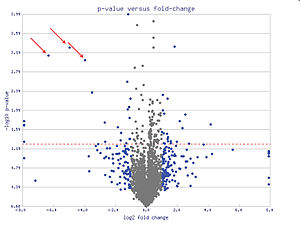 What is fold change analysis?

Fold change is a measure describing how much a quantity changes between an original and a subsequent measurement. It is defined as the ratio between the two quantities; for quantities A and B, then the fold change of B with respect to A is B/A. In other words, a change from 30 to 60 is defined as a fold-change of 2. This is also referred to as a "2-fold increase". Similarly, a change from 30 to 15 is referred to as a "2-fold decrease". Fold change is often used when analysing multiple measurements of a biological system taken at different times as the change described by the ratio between the time points is easier to interpret than the difference. Fold change is often used in analysis of gene expression data from microarray and RNA-Seq experiments for measuring change in the expression level of a gene.

CD ComputaBio's fold change also can be used to compare gene expression between two sets of arrays (for example, case group and control group). This component allows setting thresholds for multiple changes. Marks that exceed the threshold will be placed in a new set in the "Marks" component-one for markers with positive fold multiples and another for negative folds (described further below).

CD ComputaBio provides the following method to calculate the fold change. This component also allows any calculation to be performed starting from linear or log2 converted data.

The ratio of case to control is calculated with linear values. Log2 data will first be transformed into linear.
For each marker, calculate Avg (Case arrays) / Avg (Control arrays).
Ratios less than 1 are inverted and given a negative sign, e.g. 0.25 is reported as -4.
For the ratio calculation, for any given marker, the numerator must be postive or zero, and the denominator must be positive. If either condition is not met, the marker will be skipped an no fold-change calculated for it. The user will be warned about the first 5 markers that are skipped.

The fold change method is usually used to analyze gene expression data in transcriptomics, proteomics and metabolomics to measure changes under different conditions. The obvious advantage of fold change analysis is that it makes sense to biologists. In this case, one of the disadvantages and serious risks of using the multiple change method is that there is a bias, and the differentially expressed genes with a large difference (YX) but a small ratio (X/Y) may be lost, resulting in a high deletion rate under high intensity.

CD ComputaBio' fold change analysis can significantly reduce the cost and labor of the subsequent experiments. Fold change analysis is a personalized and customized innovative scientific research service. Each project needs to be evaluated before the corresponding analysis plan and price can be determined. If you want to know more about service prices or technical details, please feel free to contact us.